Christina Aguilera talks about the pressure of her former label in a recent article. The misogynist power structure would much prefer a slow, seemingly self-inflicted demise, where guns and violence wouldn’t even be needed. Just cocaine (RIP Whitney) and the ideology  that OUR BODIES are responsible for the demise of nearly everything ( you FAT, SLUT, FRUITFUL VINES, MADE FROM MAN-RIB, BLEEDING, EMOTIONAL SECOND CLASS CITIZEN BITCH WHORES!!!! ). As myself and millions of other females (and males) struggle, and rise above the wreckage of eating disorders (some of us not so lucky, like my cousin Joan RIP 1969-2002), it’s never recognized through the eyes of some, and we’re constantly made to feel guilty by stupid, ignorant, clueless types who tell us we’re “selfish“, “it’s all in our heads” and to “think of all the people who have cancer, are starving in Africa, have fought wars, etc., etc., etc.”  It’s a good thing Rush Limbaugh, Chris Christie and Kevin Smith never had to worry about their appearance to get ahead in their careers. ‘Cause they don’t have a problem. (Right.) 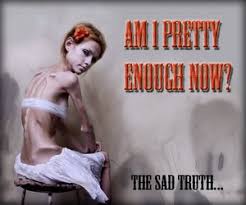